San Diego Mortgage Rate Update for The Week of June 10, 2013 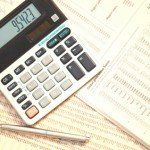 I have not posted a San Diego Mortgage Rate update in a few weeks and you may be thinking that it was due to the recent, quick increase in rates, but that is not the case.  I have actually been dealing with being sick for the last few weeks at the same time as being extremely busy with business.  I am now feeling better and getting back into the swing of things.

The last month has seen San Diego Mortgage Rates go up by about a half percent.  This has been due to a number of factors like the recent rise in the stock market, the release of decent economic reports, and members of the Fed saying that it may be time to tapper their support of the mortgage bond market.

On Friday, the Labor Department reported that 175,000 new jobs were created in May.  That was above the 159,000 expected.  The unemployment rate rose to 7.6 percent from 7.5 percent. The increase in the unemployment rate was due to more job seekers entering the labor force. This report added to the selling pressure in the mortgage bond market.

Research firm CoreLogic reported that national home prices rose 12.1 percent from April 2012 to April 2013 and were up 3.2 percent from March to April 2013. The increase was the largest gain in a year since February 2006. Even with that good news though, prices are still 22.4 percent lower than their peak in April 2006. All in all, the housing sector continues to see positive numbers.

How did this affect San Diego Home Loans?

You can see in the graph below, just how much steam mortgage bonds have last over the last 4 weeks. 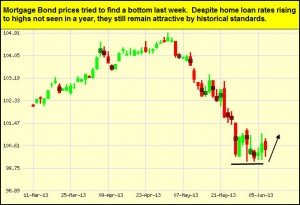 What Could Affect San Diego Mortgage Rates This Week?

It is important to consider that the Fed has been purchasing Bonds and Treasuries at a sum of $85 billion a month in the hopes of stimulating the economy. This has helped Bonds and San Diego Mortgage Rates remain attractive. Although, as the housing and employment markets have begun to improve, there have been discussions that the Fed should taper their bond purchases soon. This could have a big impact on the markets and also on San Diego Home Loan rates and it’s an important topic to watch in the weeks and months ahead.

The economic reports begin on Thursday and there are several important reports to watch.

If you are interested in getting a quote, please click HERE or feel free to give me a call at 619-312-0612. I am a San Diego Mortgage Broker and I look forward to helping you secure the best San Diego Home Loan possible.

San Diego Mortgage Rate Update for The Week of June 24, 2013